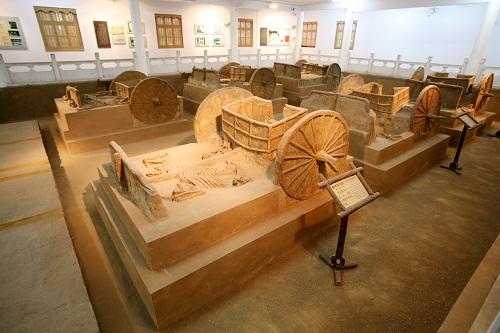 The animal energy's carriage is the most used on land vehicle for the primitive people. We have excavated the carriages for many times. Those carriages have already had a shaped structure. It's a quite long period between their making time and the first invented time. From the historic records of ancient, as early as Xia dynasty the carriage has been invented, but till now we haven't found its relics. The carriage and horse's pit excavated from Yin Ruins is the earliest specimen of animal energy's carriage. From this, we can prove that China is one of the civilized countries, which invented and used carriage.

The 6 carriage and horse's pits and the remains of paths showed in this museum are excavated by Anyang's archeological excavation team and archeological research of China society and science institution, Anyang branch from the northern field and southern field of Family Liu's village and eastern field of Xiaoming Tun. The remains of paths were found at the Anyang's gliding school. These well-preserved pits have the significant value in research work and exhibiting. In each pit, 5 pits buried carriage with two horses, 4 pits buried carriage with one person. From testifies, the buried persons were mainly matured males including one young man. Research work has proved that the carriage of Yin dynasty is fantastic one with beautiful design, fasten structure, delicate appearance, speedy revolving, balanced gravity center and comfortable seats. The pits show many aspects not only the civilized level of animal energy's carriage but also the funeral system of burying slaves. It is just like a mimic history book to all of us.