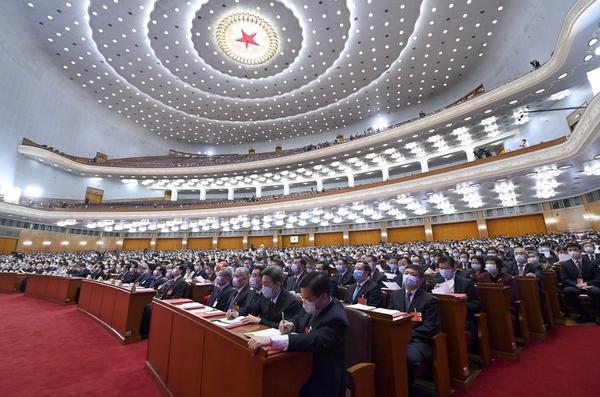 The closing meeting of the third session of the 13th National People's Congress is held at the Great Hall of the People in Beijing, capital of China, May 28, 2020. [Photo/Xinhua]

BEIJING -- The full text of the work report of the Standing Committee of the National People's Congress delivered by the committee's chairman Li Zhanshu and approved Thursday at the third session of the 13th NPC was released via Xinhua News Agency on Sunday.

I. Ensuring full implementation of the Constitution in all aspects of state governance;

III. Advancing oversight work in line with legally prescribed duties and with a focus on major tasks in reform and development;

IV. Improving working systems and mechanisms for supporting and serving deputies in the law-based performance of their duties;

V. Carrying out work on international exchanges in the service of the overall diplomatic work of the Party and the state;

VI. Intensified self-improvement efforts with a focus on upholding the unity between the leadership of the Party, the position of the people as masters of the country, and law-based governance.

The report highlights the following for the NPC Standing Committee's main tasks for the coming months:

I. Ensuring full enforcement of the Constitution;

III. Exercising oversight in accordance with the law;

IV. Supporting deputies in performing their duties in accordance with the law;